More on the Sadness of Don Quixote: The First Known Quixote Illustration, Paris, 1618111

In a previous article (Cervantes, VIII, 2)) I noted P. E. Russell's use of the Thomas Shelton translation «The Knight of the Ill-favoured Face» for «El Caballero de la Triste Figura» to support his argument that early translators, considering Don Quixote as a «funny book», better understood the nature of that «epithet» than have modern translators, most of whom have been influenced by the 19th century Romantic interpretation of Cervantes's novel. I pointed out that Shelton himself used, along with other variations, the phrase Knight of the Sad Countenance some two hundred years before the Romantics, and I suggested that even in the 17th century, when Don Quixote was supposedly taken only as a «funny novel», there were those, perhaps numbering a few, who at times noted the sadness of Don Quixote the character, particularly at the very end of Cervantes's work. The use of the Knight of the Sad Countenance to denote Don Quixote's sadness therefore did not seem to be so inappropriate as Russell and others had considered it to be.

Here I present further observations in possible support of the admission of a sad Don Quixote even in the early 17th century.

I call attention to what is today generally considered to be the first known illustration of Don Quixote and Sancho Panza, which appears as an engraved vignette on the printed title-page of François de Rosset's French translation of Don Quixote Part II, Paris, 1618. The reader should not confuse this illustration with the more commonly reproduced (see covers of Juan Bautista Avalle-Arce's Nuevos deslindes cervantinos, 1975, and Sandra Forbes Gerhard's «Don Quixote» and the Shelton Translation, 1982) engraved title-pages of the London 1620 second edition of Shelton's English Part I, and the London 1620 first English edition of Part II, purportedly by Shelton. The illustration which appears in the London editions is a copy of the Paris vignette, and though handled in a more decorative, controlled manner is in one respect not so revealing as the original. The original and the copy are both unsigned.

The Paris engraving to which I refer is drawn by what would appear at first glance to be a less experienced hand than that which produced the London 1620 title pages. Because of this and because the 1620 Part I was not dated, the copy has been considered -and is still mistakenly considered by some- as the original. Don Quixote and Sancho ride left, mounted; Don Quixote, wears his «helmet of Mambrino» and holds his lance firmly in his right hand. Sancho follows somewhat passively. The most remarkable feature of the 1618 drawing is the sensitive manner in which the knight's face is depicted. The viewer sees that Don Quixote bears a distinctly drawn, weary, mournful look which surely can be taken as one of sadness. An argument can be made suggesting that the look is the artist's way of representing Don Quixote as a madman. Even so, the face would still seem to be that of a deeply concerned or grieved -i. e., sad- madman.

In order to see how others would interpret the face I surveyed the reaction of fifty-eight of my «Quixote in English translation» students (my class presently has an enrollment of sixty-one), asking each to give personal, candid descriptions of the face on the vignette. Their responses were made at a time when they had read only three quarters of Part I. I did not show the face alone, but the entire vignette, which accounts for some of the unexpected descriptions given. One hundred three variations were offered with most of these appropriately expressing physical or mental conditions. The word «tired» appeared twelve times, «weary» four, «exhausted» once, «worn out» three. Along with these were expressions such as «pained», «hurt», «beaten», «defeated», «feeble», «frail», «pitiful», «pitiable», «thin», and «unhealthy». «Sad» and words like it such as «unhappy»,   —77→   «melancholic», «discontent», «disillusioned», «disappointed», «burdened» «forlorn», «unfulfilled», «dejected», «rejected», «resigned», and «somber» appeared some thirty-four times. Another similar group with words like «pensive», «thoughtful», «contemplative», «removed», «concerned», «preoccupied», «confused», «worried», «perplexed», «doubtful», «troubled», «unsure», and «lost» were used twelve times. Seventeen students chose expressions such as «sure of himself», «self content», «determined», «stubborn», «persevering», «focused on a purpose», «cocky», «proud», «ready to charge ahead», and «serious». Words like «vengeful», «stern», «brave», «mocking», «noble», «heroic (crazed)», «wise», and «inspired» appeared once. These expressions probably come from features of the drawing other than the face, or perhaps from sentiments already gained from a partial reading of the book. «Comical» appeared once, with the same student also using «weary», «forlorn», «thin», «unhealthy», and «old». For the most part the words and expressions chosen by these students to characterize the face on the vignette could be generally categorized as «mournful», woeful», or «sad». There was reason to believe that results of any other survey would be the same, and so my own characterization seemed to be justified.

If the character and book were (in the 17th century) being considered burlesque, as the «hard» critics contend, how could such a distinctly unfunny, graphic interpretation have come about? Was this deliberate or accidental? The face on the English copy is bland and expressionless. A version of the Paris 1618 plate was crudely reproduced in two Paris 1639 editions with the delicate facial characteristics of the original rather grossly drawn. Such variations tempt one to believe that the rendering of the original was deliberate and drawn and cut by a practised hand. Either the artist-engraver himself decided upon the manner of depiction or the translator or publisher did. Since de Rosset was of the nobility, most likely fairly well off and a popular writer / translator at least in his day, it is probable the decision was made by him. What can have made him see Don Quixote, the personage, as «sad» at a time when the book was generally being considered a farce? Part I was farcical, and the impression formed by readers of this part will have held sway. Part II, especially in its final pages, many have pointed out, hints at something more. It is probable that much of the documentation provided by scholars with reference to 17th century allusions to the Quixote is based chiefly upon impressions formed by readers of Part I, most of whom probably never bothered to read Part II, presuming all   —78→   of it was merely more of the same. De Rosset, translating Part II in its entirety, just may have spotted that «something more» at the end of Cervantes's novel.

François de Rosset (1570?-1619) -our first translator of Part II- «docteur es droits et advocat en Parlement», was quite a familiar figure at the French court during the first couple of decades of the 17th century. Though known today only to specialists in French literature of the period, a count of the editions of his works during his lifetime -well over forty- attests to his popularity as a dabbler in poetry, the theater, a writer of lurid tales, and as a translator. A listing here of only seven of his works gives one a pertinent idea of one bent of his mind, showing strong interest in the theme of chivalry and in Cervantes.

1618 - Seconde partie de l'histoire de l'ingénieux et redoute chevalier Dom Quichot de la Manche. (César Oudin had done Part I in 1614. The 1618 is the edition of interest here with its vignette of Don Quixote and Sancho.)

1619 - Roland l'amoureux de Matteo Maria Bojardo. Not only was de Rosset (and evidently his readers) strongly interested in Cervantes, but also in Boiardo, Ariosto, one of the sequels to Amadís, and a romance based upon «chivalric» events taking place at the French court. Since the days of Francis I, when the French court busied itself constructing gardens and buildings described in Amadís, to the times of Honoré D'Urfé's very popular 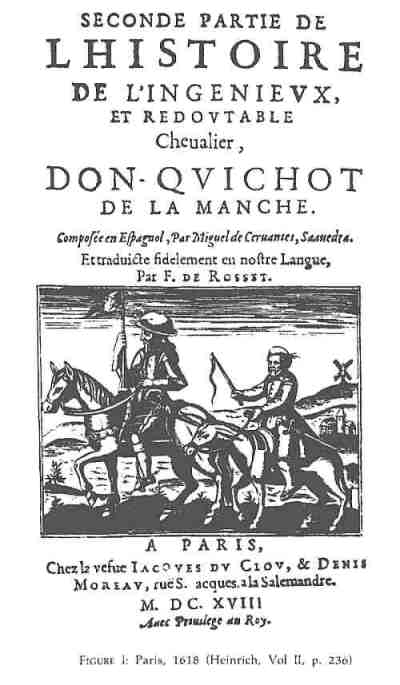 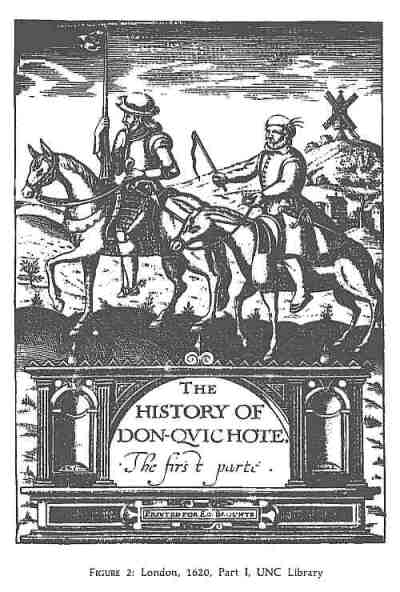 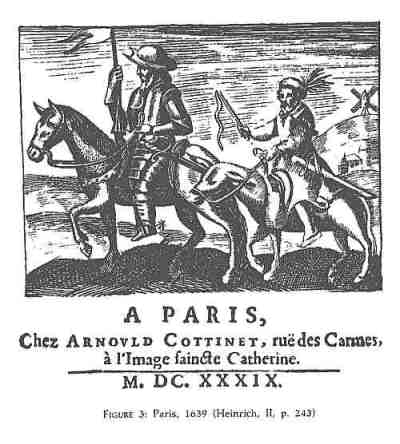 L'Astrée (1607) (which borrowed from the chivalresque as well as the pastoral novel), to de Rosset's renditions of chivalresque themes, there obviously still existed a lively interest in chivalry at court in France and surely elsewhere as well. De Rosset undoubtedly took delight in reading and writing about chivalric days of yore, whether they were fanciful or not. Can we not smilingly with good reason suppose and even declare that these courtly gentlemen, these would-be knights errant, were the romantics -the Don Quixotes of their day? How would these dreamers, then, have interpreted Cervantes's novel? We can presume they laughed, along with the general populace, at the «mad» knight's antics, but we can be about as sure they sensed the character's nobility and consequently regretted not a little Cervantes's almost merciless insistence -at least until the end of the novel- on the character's follies and his failures. In short, a romantic like de Rosset is likely to have said, along with quite a few kindred spirits of his day, the same things their counterparts were to say two centuries later.

François de Rosset, a 17th-century romantic with a strong love for chivalric themes, having carefully read and translated Cervantes's Part II through to the end, seems to have noted in the same way more modern writers have noted -through all the humor, I reiterate- Don Quixote's nobility and his sadness, and may indeed have determined, as he proposed what we now call the very first illustration depicting the two protagonists, to have Don Quixote portrayed as «Le Chevalier de la Triste Figure», mad (he still wears the basin on his head) and sad, as he contemplates his concerns and his failures.

With Don Quixote's sadness made more admissible -by those like Thomas Shelton and the unknown first English translator of Part II on the one hand, and de Rosset's 1618 Paris vignette on the other- it would seem that one could begin to make a better case on behalf of many of the criticized conclusions of the 19th-century Romantics, which conclusions will seem not so implausible after all. Discerning readers of any age from the 17th century on, noting this sadness, naturally and with some validity have been and will continue to be tempted to idealize Cervantes's character.

Students of Cervantes, especially those interested in Quixote iconography, may like to know that it is probable the Paris 1618 vignette was engraved by Leonard Gaultier and/or one of his apprentices. Gaultier, I mention above, executed the illustrations and the beautiful frontispiece to de Rosset's translation of Orlando Furioso   —83→   which included a portrait of the translator. At the time Ariosto's light shone much more brightly, of course, than did that of Cervantes, and consequently a comparatively piddling effort was made (at a much reduced fee, we can assume) to produce the vignette. The all-important face was probably the work of the master prompted by de Rosset, while other lesser elements such as the buildings to the right of Sancho can have been the work of the student. As for the less rare copies of the London 1620 Parts I and/or II (some copies of II do not contain the engraved title-page) my fairly extensive investigations indicate Renold Elstrack as the probable engraver of the title-page copies.